The Peutz-Jeghers (PJS) is an autossomal dominant condition. It´s predominant clinical features are melanosis in the oral mucosa and intestinal polyposis, with a tendency for malignant transformation. The dentists could be the first professional to detect the oral lesions, and aid in early diagnosis of the condition. Earlier is the diagnosis better is the prognosis since the intestinal polyposis could lead to malignant transformation. This publication is a case report from a patient that presented to the dentist for routine evaluation of the mouth, although later, she was diagnosed as a case of PJS.

The Peutz-Jeghers (PJS) is an autossomal dominant condition, which prevalence is 1 in 8300 to 29000 births in USA (Bishop, Loftis e Nowicki, 2004 ). There is no sex or race predilection. Although this is a genetic autossomal dominant disease, just half of the patients give a positive family history during anamnesis.

The evolution of PJS during life, exposes the patient to a predisposition to developing malignant neoplasias, mainly in the small bowel, ceccum, rectum, as well as pancreatic adenocarcinomas. Other more rare carcinomas could occur in the breast, uterus, testicles and ovarium. The risk for cancer of those patients is 18 times higher in comparison with the general population, and as high as the number of intestinal polyps the higher is the chance for malignant transformation (Lindor, 2004). The first case of PJS, was presented by Hutchinson in 1896, when he described a case of twins with diffuse labial pigmentation. Peutz presented in 1921 a case of intestinal familial polyposis associated with hyperpigmentation of skin and mucosa in general. In 1949, Jeghers et al. complemented the association of pigmentation and intestinal polyposis and confirmed the familiar origin of the disease (Schreibman et al., 2005). Since then, these features together were denominated Peutz-Jeghers Syndrome (PJS). The Involved chromossome is 19p13.3 with apparent mutation in the locus (STK11) LKB1 with the enzyme serin/treonin kinase functionally inhibiting the tumoral supressor genes ( Doxey, Kuwada e Burt, 2005 ).

The melanotic pigmentation could be present at birth or appearing later in childhood, with characteristic distribution in the perioral mucosa (Pereira et al., 2005). It is important to emphasize that they are spots-like and not plaques, with alteration in color but not in the surface of the lesions. In the mouth, the main area of occurrence is the labial mucosa as well as the buccal mucosa, but they can also be found on the tongue, gingiva and hard palate, and are variable in number as well as in shape (Ciçek & Ertas, 2003 ). In the skin they occur in general on the dorsum of the hands and feet, and also the fingers. The lesions are very dark or dark blue, with a diameter ranging from 1 to 12 mm. When the melanotic spots are localized on the face, the diameter of the spots rarely are larger than 2 mm (Afolabi, 2003 ).

The skin lesions could disappear during puberty but the lesions in the mouth persists forever. The histological evaluation show higher amounts of melanin in the basal layer of the epithelium close to the basal lamina. The hamartomatous polyps are the main characteristic of the syndrome and they could vary in their shape, size, number and anatomical distribution, being found in different areas of gastrointestinal tract. In older patients, during colonoscopy multiple polyps are mainly found in the final bowel region. The polypus could be sessiles or pedunculated, with a diameter varying between 1 to 3 cm, and they could be considered capable to transformation in real cancer depending on the histological aspects seen in microscopy.

Approximatelly 35% of the patients with PJS were diagnosed in childhood or during puberty (Bronner, 2003 ). In general they complain of abdominal pain, compression of abdominal area, mainly in the region of intestinal colum, blood in the feces and frequent muscular spasm after ingestion of meals. There is alternating diarrhea and intestinal constipation. The symptoms of intestinal obstruction and/or hemorrage start to appear at 20 and 30 years of age. (Bronner, 2003 ).

When there is a suspaician of PJS, the gastrointestinal tract of the patient needs to be evaluated and examined by gastric endoscopy and colonoscopy, as well as the intestinal transit of fecal material by contrast radiographies. Other investigations are reactive proteín C, ferritin and hemogram, to detect inflammation and lost of blood in the feces (Schreibman et al., 2005 ). The histological examination of the oral pigmentation include large amounts of melanin in the basal layer of the epithelium. Considering the features of PJS, the differential diagnosis are: Crohn, Albright and Addison diseases .The gastroenterologist is the indicated professional to treat the disease more suitably.

A 24 years old single caucasian female, patient from São Paulo, attended in the Department of Oral Medicine of the School of Dentistry at Santo Amaro-Unisa, Brazil) for routine dental treatment. The clinical intra-oral exam revelead dark pigmented spots, painless, and varying in size and number, in the right and left sides of buccal mucosa and in the lips (Figs. 1,2). The general condition of oral hygiene was reasonable, although mild gingivitis was observed. The other aspects of the oral cavity were within normal limits.

Some inflammatory submandibular lymphnodes were observed bilaterally. During Medical history she did not mentioned any disease except some childhood diseases. Some lab investigations such as glycemia, hemogram, urine type I were within normal range.

The patient had never observed the pigmentation in the cheek and did not know the cause of them. The arterial blood pressure at the time of consultation was 120 x 80 mm Hg, the pulse was 85 bpm and the body temperature was 36.5° C. The color and the face was normal and without any pigmentation as well as in other regions of the body. The patient´s younger brother and deceased parents had no such symptoms.

The patient mentioned gastrointestinal problems such diffuse pain and intestinal constipation of many years duration, but she had never visited a gastroenterologist for consultation. All signs and symptoms were suggestive of Peutz-Jeghers Syndrome and so, the patient was advised to make an appointment with a gastroenterologist. We first asked for a dosage of ACTH to eliminate the possibility of Addison disease. An incisional biopsy was also accomplished in one of the pigmented spots. The microscopic result was melanotic pigmentation (fig 3). To investigate the possibility of Albright syndrome, radiographic from the femur, in different positions (front and lateral) were done, and the results showed normal bone aspects for the patient´s age. All the exams results were given to the patient in order to show to the gastroenterologist. The physicians requested for a colonoscopy and the result was positive for colon diverticular polyposis (fig.4), and the diagnosis of PJS have made. Currently the patient is under dental and medical treatment.

The dentist must guide the patient when any unusual signs and/or symptom are observed during an anamnesis and clinical examination.

Additionally the oral cavity is considered a part of the gastrointestinal tract of the individual. Any experienced clinician knows that a detailed examination of the oral cavity may show signs of many systemic diseases, for example anemia, leukemias, dermatological diseases, systemic diseases and several syndromes. Considering PJS particularly or any other disease, early diagnosis is very important for the patient and subsequent treatment. The dentist as a health professional, may have the opportunity to diagnose many systemic diseases, since many signs or symptoms of these disease may appear first in the mouth. In this specific case presented, the multiple pigmented lesions in childhood or puberty, scattered in the mouth and periorally, PJS must be considered in the diagnosis. Nowadays the dentists are well informed and have studied much more than in the past and know more about general pathology. Thus it is essential to establish an integration between all health professionals, mainly, dentists and physicians. Such interchangeable experiences and knowledge are of fundamental importance in diagnosis that would benefit the common patient. Thus always an early diagnosis could sometimes aid in management of the disease, thereby reducing morbidity and mortality of our patients.

The dentist must be capable of recognizing the characteristic signs and symptoms of Peutz-Jeghers Syndrome (PJS) in oral cavity and ascertain early diagnosis in connection with the patient physician.

Although it is a rare syndrome, if let alone, it could promote a gastrointestinal carcinoma, that could be lethal to the patient´s life.

In addition to an oral examination the dentist should request for further investigations if there is suspicion of any systemic disease with oral manifestations.

Unfortunately the biopsy is still not an investigation procedure routinely used by the dentist, but this conception must be changed.

– A patient suspected of PJS, should visit a gastroenterologist to confirm the diagnosis before any dental treatment has been started.

– Any alteration in color and/or pigmentation in the oral cavity, even without any other symptoms, should, in principle, be always investigated. 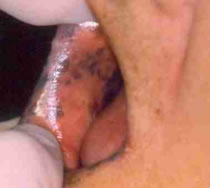 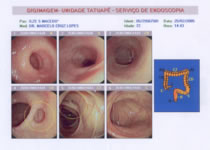 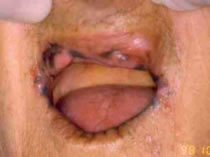